What is Cloud Penetration Testing? 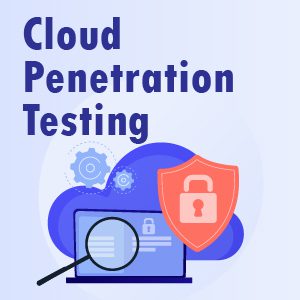 Cloud Penetration Testing is an authorized simulation of a cyberattack against a system that is hosted on a cloud service provider. Its main objective is to find the threats and weaknesses of a system hosted on a cloud platform so that you can see how secure it is. Cloud app pen testing also requires a shared responsibility model.

A penetration testing strategy for a cloud-based app should include the following:

Network access: Examine how well the network safeguards the application and data

Data: Check how the testers will test the data as it passes through the application and into the database

Virtualization: Determine how well virtual machines can separate your workload

Regulation: Know the laws and regulations you need to adhere to within the application or database

Approach: Determine whether application admins should be included.

There are several penetration testing tools on the market. While it’s common to use on-premises tools to test cloud-based services, you can now also use cloud-based testing tech that may be more cost-effective. Furthermore, they do not require a large amount of hardware. The tool’s main feature is that it can imitate an actual attack.

While this may seem like an obvious step, in the end, you’ll have a list of vulnerabilities identified by penetration testing. The list could be hundreds of issues long or as short as two or three.

If there aren’t any, your testing may not be as effective as it should be, and you should consider it again and retry. Vulnerabilities discovered during penetration testing of cloud-based apps often look like these

Of course, the issues you discover will differ based on the application and type of penetration testing you conduct. Also, keep in mind that there are other layers to consider.

Perform separate tests on the application, network, database, and storage layers, and report issues one by one. The layers should also be tested jointly to study how well they work together and if there are any concerns. It’s best practice to report what happened at each layer as a whole. By reporting the vulnerabilities at each layer, it will be easy for the developer to rectify the flaws and safeguard the application.