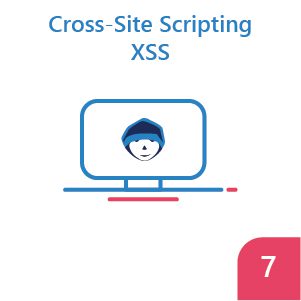 A cross-site Scripting flaw occurs whenever the attacker makes use of DOM and API to retrieve data or send commands to the application.

Cross-site scripting may widen the surface of the attack for the hacker by allowing him to hack user credentials, spread worms, and control browsers remotely.

An attacker tricks the web application to send data to an entity where the user’s browser can execute it.

Cross-site scripting does not directly target the application but targets the users who are using it. If the user has access to confidential data, the attacker may take control over the entire application.

Cross-site scripting is classified into three

Reflected Cross-site Scripting: In reflected cross-site scripting the script which is injected onto the XML document is reflected in the server. It includes an error message, search response, or any other input that is sent to the server as a part of the request. When a user unknowingly clicks a malicious link the code is injected, the attack is reflected on the user.

Dom Cross-site Scripting: The Document Object Model is a programming interface that gives developers the ability to access the document (web page) and manipulate it by executing operations, therefore this interface defines the structure of documents by connecting the scripting language to the actual webpage.

DOM-based XSS, also known as Type-0 XSS, is an XSS attack in which the attack payload is executed by altering the DOM in the victim’s browser. This causes the client to run code, without the user’s knowledge or consent. The HTTP response itself will not change, but a change in the DOM environment will cause the client code contained in the page to execute differently.

Cross-site scripting attacks can be prevented with the help of a web application firewall (WAF). A WAF serves as a filter between the server and the web traffic.